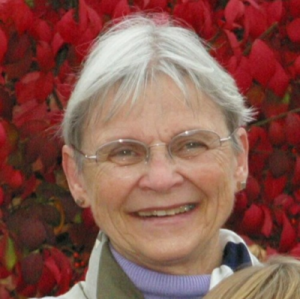 It is with profound sadness that we pass along news of Barbara Mann’s passing this past Wednesday, September 7, 2022.  Many of you cannot think of Barbara without associating her with the Stratham Historical Society.  Her profound impact benefitted many over her three plus decades with SHS, and her legacy lives on in programs that SHS is continued to be recognized by today.

In the picture below are four of the founding and lifetime members of the Stratham Historical Society.  Standing in the background is Jerry Batchelder who helped launch SHS by circulating a petition at the Stratham Fair in 1970.  He became our first president.  He was followed as president by Graeme Mann who is seated in the center of the photo.  Seated center right is founding and lifetime member Teddie Smith, and seated center left is the unmistakable Barbara who succeeded Graeme as president and oversaw the painstaking development of our museum, our library and our exhaustive collections. 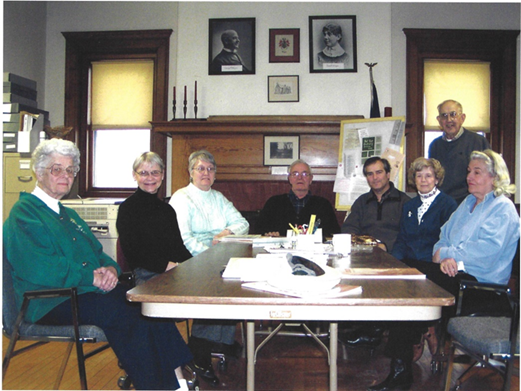 In 1992, not long after the Wiggin Memorial Library moved to its current home in the Town Municipal Center, the Stratham Historical Society moved into 158 Portsmouth Avenue.  By 1993, Stratham Historical Society President Barbara Mann succeeded in historically preserving SHS’ new home with a designation on the National Register of Historic Places. As early American antique dealers, Graeme and Barbara thought to introduce Antique Appraisal Days, similar to PBS Antiques Road Shows, as fun and fundraisers that started over 30 years ago and are now held twice a year.  Sharing local history and education became a staple during the Mann years.  SHS offers 4-5 educational programs annually, and even more since COVID thanks to Zoom events produced in cooperation with the Wiggin Memorial Library.  We were delighted that Barbara joined us for many of those Zoom programs.  Under Barbara’s leadership, the Stratham Historical Society embraced software that would help the Society manage its sometimes overwhelming gifts and collections.  Perhaps most meaningfully, Barbara befriended SHS neighbor Winfield Foote.  Mr. Foote lived alone and periodically visited Barbara at SHS from his historic house two doors away.  His family bought the former Christian Church parsonage in 1930.  When Mr. Foote passed in 2004, he surprisingly bequeathed his house and personal property to the Stratham Historical Society.  During Barbara’s administration, her kindness and the sale of Mr. Foote’s house the following year secured SHS’ financial future and is the basis for scholarships given to Stratham residents each year.  To date, SHS has given over $120,000 in scholarships and grants to over 100 recipients.  The scholarship program continues today, and it is one of the Stratham Historical Society’s most gratifying activities.   Barbara wrote her last annual summary for the Stratham Historical Society in the Town Report for 2006 before relocating to be with family in Frederick, Maryland.